Although already an artist in my youth it wasn't until later that I decided to pursue it for real.

Living in Edinburgh in the early 80s I had just about given up on art because my school years had been messed up in a hopelessly bad school in an British colony of Africa called Rhodesia, and I was shunned by any established Art Colleges for my lack of  O'Levels.

But after catching up on my grades with further education (Stevenson College),  I made a romantic decision to head off to a Greek island and experience a completely new lifestyle, as a kind of modern-day Robinson Crusoe.

After 3 long days with a Scottish alcoholic in a makeshift tent on an isolated beach I gave up on the Crusoe idea.

But I definitely wanted to stay away much longer. Anything was better than gloomy Thatcherism and the British addiction to newspapers.

After two action-packed years in the sun, sea and sand,  and being betrayed  by a girlfriend  I decided it was time to go  home accompanied by an English street magician I had just met. It seems like the break-up with my girlfriend and a silly incident with the local police were catalysts for my epiphany;

I realised that my purpose is to do art, to bring others joy with my creativity, and to rise above the life's confusions by making art.

With hitch-hiking and doing  portraits of tourists I made the long journey back to Scotland. The rest is of course history.... 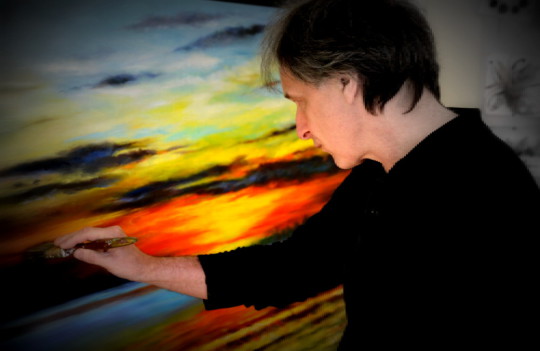 with my original artwork

A Very Special and Unique Gift-Idea

get updates on my latest paintings, or any other news.